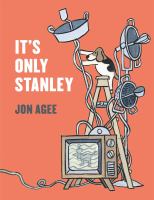 Kids will love trying to guess what on earth Stanley the dog is up to in this very funny picture book.

You can find a full review in the "Summary" section. The review was published in the Stratford Gazette in February, 2016.

My 5 year old loves this book. And the rhyming is very well done.

What a fun rhyming read with a clever twist ending. Preschoolers will be delighted to see what exactly Stanley has up his sleeve. Important details are hidden in Agee's illustrations from the very first page. Stanley may be the star of the show, but keep your eye on the poor cat.

There is an understated humor to Stanley's tireless efforts. Whenever Walter goes to check on each interruption, the book shows a hilarious scene of him discovering the dog completely lost in his particular task.

Really cute! This book made my 4 year old laugh. We reread it many many times before we were allowed to return it.

A strange noise sounds in the night, and when the family goes to investigate, what do they find, well, their dog howling at the moon. However, that's not the only sound they hear that night. Each time they go to look, they find Stanley doing something even more incredible. This rhyming repetitive text builds up from the typical answer to transforming the house into a spaceship. Whether they get back to Earth or not is left to our imaginations, but considering how clever this dog is, it should be no problem. A cute, quick read.

Stanley is a gem around the house, fixing things that are broken but he keeps the whole family awake banging and clanking all night long. Why is Stanley working so hard? A cute quirky story about what a dog will do for love.

Late one night when all the Wimbledons were sleeping (and when Stanley, the dog, should also have been sleeping), Wendy Wimbledon heard a strange sound. Walter Wimbledon investigated and reported that it was only Stanley, howling at the moon.
Later that same night, Wendy awoke again, hearing an odd clanking sound. Walter looked around the house and reported that it was only Stanley, “fixing” the oil tank.
Even later (at almost half past two), Willie Wimbledon awoke because he could smell something … a “funky smell”. Walter discovered that it was only Stanley, “cooking” something in the kitchen.
And even later that same night (at almost half past three), Wanda Wimbledon awoke, hearing a buzzing noise. Walter reported that it was only Stanley, “fixing” the old TV.
Very, very late that night, Wylie Wimbledon awoke because he could hear a splashing sound. Walter reported that again, it was only Stanley. This time he was “fixing” the bathtub drain.
But had Stanley really been fixing anything at all that night? Perhaps, instead, he was building something …
By now all the Wimbledons were wide awake and they were not happy. “We’ll never get to sleep tonight if Stanley doesn’t quit!”
Walter went to speak to Stanley. Just then, there was a big KAPOW! “It’s only Stanley!” Walter rushed back to report. “We’re going to the---”
There wasn’t time for Walter to finish his sentence before the Wimbledons’ house, with Stanley and all the Wimbledons inside, blasted off into outer space!
So what had Stanley REALLY been up to all night?
Readers will laugh aloud at this hilarious, irreverent tale (told in rhyme and perfect for reading aloud) featuring a very resourceful dog, his family, a spectacular invention and an unanticipated romantic ending!
** Recommended for ages 4 to 7 years.

There are no notices for this title yet.

There are no quotes for this title yet.

Find it at Library