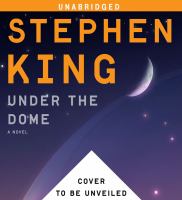 On an entirely normal, beautiful fall day in Chester's Mill, Maine, the town is inexplicably and suddenly sealed off from the rest of the world by an invisible force field. Planes crash into it and fall from the sky in flaming wreckage, a gardener's hand is severed as the dome comes down on it, people running errands in the neighboring town are divided from their families, and cars explode on impact. No one can fathom what this barrier is, where it came from, and when -- or if -- it will go away.Dale Barbara, Iraq vet and now a short-order cook, finds himself teamed with a few intrepid citizens -- town newspaper owner Julia Shumway, a physician's assistant at the hospital, a select-woman, and three brave kids. Against them stands Big Jim Rennie, a politician who will stop at nothing -- even murder -- to hold the reins of power, and his son, who is keeping a horrible secret in a dark pantry. But their main adversary is the Dome itself. Because time isn't just short. It's running out.
Publisher: New York : Simon & Schuster Audio, 12 cm.
ISBN: 9780743597920
Characteristics: 3 compact discs (ca. 35 hrs.) :,digital ;,12 cm.
Additional Contributors: Esparza, Raul

Forgettable characters, terrible storyline, and a chore to listen to. I didn't finish it because I couldn't stomach it any further. Can't imagine how someone thought this was good enough turn into a tv show. I guess others felt the same since it was cancelled.

One of the worst books I've ever listened to. Could not believe that this was written by Stephen King. It read like a discarded movie of the week script from the 1970's. Utter garbage.

Although it is long, I did enjoy the story and stayed with it through all 30 discs.
I felt it had good character development and am looking forward to comparing the book to the new television series by the same name.

An enthralling audio-adaptation of a big, big book (30 discs in length meant I was listening to this pretty much for a month during my daily commute, quite a time investment!).

King keeps the story moving at a very brisk pace, and does not show his hand too quickly as many characters which are well-developed in the opening chapters are not guaranteed any kind of long term survival, playing against expectations.

The narration is very well done, though I do have to quibble with the "kiss my grits!" good ole boy accent they chose to employ for the character of Big Jim. This, and the "far out" ending account for my half-star deduction.

Damn. Stephen King has been such hit or miss for me lately. Add Under the Dome to the latter column. I tried, I really tried to like this one, but I feel the story took too long to figure out what it wanted to do. Normally I don't mind as long as the characters are worth paying attention to. Not this time. I threw in the towel about 1/3rd of the way in.

A mysterious invisible barrier suddenly appears one day surrounding a small town in Maine cutting it off from the outside world. This creates unimaginable fear, chaos and leaves many questions unanswered.
A power struggle inevitably ensues between the town bullies and religious zealots, while a handful of reasonable characters try to prepare for the consequences certain to come from living with limited vital resources. Moreover, bodies are beginning to pile up at an alarming rate and where are the town’s propane supplies disappearing to?
Pretty much classic Stephen King; good story, entertaining but just a little too drawn out. Well narrated. Would definitely recommend it to anyone who doesn't mind the 31 hour investment this audiobook requires.

I liked it. Some of the technology a bit dated. Would have used lasers and compressed air for example. Still good and fun to listen too.

I really enjoyed this book. At over 31 hours, King did a great job in developing the plot. The reader was awesome. The local mentalities were frightening, plausible and disturbing. Gotta love King for that!

The first recommendation about this book, is the audiobook version, which I had listened to. The voice actor, Raul Esparza, has an intonation, a voice inflection, a characterization for each of the major characters and does it incredibly well, his voice talent brings the audiobook to real life and you will feel like you know each of the characters. Amazing job, Mr. Esparza.

The book revolves around a McGuffin of sorts, albeit a pervasive one throughout the storyline, and it is the dome. This McGuffin causes all of the action and, mostly, mis-action to happen. As the inhabitants of Chester's Mill wake up to realize that a dome has mysteriously appeared over their small town, events quickly escalate into a degeneration of humanity. The unfortunate few who make this discovery include a poor animal as it, well, you'll read it, and a plane as it, well, you'll read that too, and worse, a rig full of lumber as it, well, you'll definitely read that one, because by that time, you will be riveted to the narrative.

The core of the degeneration, however, is Second Selectman Jim Rennie, and what a ruse and miscreant he is. He slowly, very subtly in ways that, in my mind emulated the way tyrants take over, much like Hitler did to secure power and a power base, takes control over the small town. The hero, former army Captain Dale Barbara (Barbi) of the Iraq war, as all heroes are wont to do, is reluctant, preferring to believe in the power and kindness of humanity over tyranny. But, as all reluctant heroes are also wont to do, severely errs in judgement. Under a presidential order, from an Obama-like character no less, he is promoted to full Colonel, and must find a solution to this problem. Along the way, his ragtag, loose coalition loses ground and the town falls deeper into the abyss and stronghold of Hitler-esque Rennie.

A wonderful turning point is Rennie's one moment to turn to God in prayer, and tells us that when politicians do, that is the eventual downfall of our innocent and naive beliefs.

The twists and turns are ingeniously wrapped into your imagination and delve deep into your willingness to believe otherwise, and author Stephen King masterfully does this, without his trademark macabre-ness. If your blood does not boil over, over the machinations of the antagonists, then I fear the bad guys have won.

This is a long book, but, your enthusiasm for the conclusion will never abate. Guaranteed.

Good. Technology a little data. Should have tried lasers and compressed air.

There are no age suitabilities for this title yet.

There are no notices for this title yet.

There are no quotes for this title yet.

Find it at Library